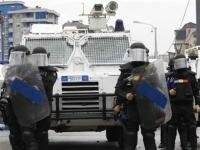 Serbs from the north and Albanians from the south pelted each other with stones for about 10 minutes, prompting Kosovo police and European Union security forces to close the bridge on the Ibar river which separates the two communities and separate the two groups.

A Serb youth Milos Radenkovic (21) from Zveccan was wounded Saturday evening in a clash between Serbs and ethnic Albanians in Kosovska Mitrovica.He was shot in the arm, and three other Serbs were also lightly wounded, doctors from the Dragisa Misovic health center told Tanjug.

The clashes began after Turkey beat Serbia 83-82 in a World Basketball Championship match on Saturday night in Istanbul.

Kosovo Police Service (KPS) spokesman Besim Hoti told Tanjug that situation in the Town is under control after the clashes.

Serbs from the north and Albanians from the south pelted each other with stones for about 10 minutes, prompting Kosovo police and European Union security forces to close the bridge on the Ibar river which separates the two communities and separate the two groups.

There are no reports on any ethnic Albanians being injured, Hoti said.

Minister for Kosovo-Metohija Goran Bogdanovic stated today that last night’s riots in Kosovska Mitrovica are another proof of the necessity of a dialogue between Serbs and Albanians which should be organized as soon as possible.

In a statement to the Tanjug news agency Bogdanovic condemned the perpetrators of these disorders in which seven persons were injured, underlining that such events are very worrying.

The Minister voiced his regret over the fact that a sports event was used as an occasion for a conflict between Serbs and Albanians, stressing that the two sides should sit down and talk as soon as they can, as this is inevitable and necessary.

We should discuss all contestable issues and not wait for another incident ending up in more victims and more hostilities. Instead, we should try to calm down the tensions, Bogdanovic declared.

He called upon Kosovo Serbs not to respond to provocation by Albanian extremists and to think rationally.

We should discuss the safety of the Serbian community in the province. We need something that will
guarantee long-term peace and security in this area, Bogdanovic declared.

In the riots which broke out after a basketball game between Serbia and Turkey in Istanbul, seven persons were injured, including one member of the EULEX police.

Referring to the events in Mitrovica on the night between 11 and 12 September 2010 Head of Mission of
EULEX Kosovo, Yves de Kermabon, stated the following:

“EULEX strongly condemns the perpetrators of the violent clashes in Mitrovica last night where, in attempting to restore order, one EULEX police officer was wounded when shots were fired in the direction of the EULEX Formed Police Units and Molotov Cocktails were also thrown. One Kosovo Police Officer was also slightly injured.

These acts of senseless hooliganism have no place in any democratic society and need to be condemned
by all.

EULEX will not tolerate such unlawful behaviour and is ready to take whatever measures are required,
in conjunction with the Kosovo Police and KFOR, to ensure that any repetition of such events will be
vigorously dealt with.”