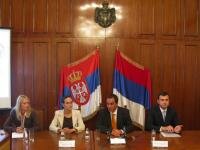 Director of company Infostud, Mrs Branislava Gajic said that Infostud as the biggest job search website in Serbia, contributed to employment of 35000 people from Serbia in the last year, and that their goal is to include quality experts from Diaspora in that number .

”We have a will to connect this people with companies that could offer them good working condition, and in that way they return will benefit both sides. First step in that direction is targeting needs of our people in Diaspora, problems that they are facing that is stopping them to come back and meeting those needs with needs of our companies that are looking for employees. In that sense cooperation with Ministry for Diaspora is a natural step and we are expecting good results, ”said Branislava Gajic.

In his speech, Minister Sreckovic said that one of priorities of his Ministry is return of young experts in Serbia who will fill the gap that is left after Brain-drainage in 90's when 500.000 people left Serbia, and where 100000 of them were graduated.

One of the main reasons for signing this agreement is, said Sreckovic, that company Infostud is most efficient employer in Serbia.

Minister added that Ministry for Diaspora and Government of Serbia are showing in this way that every young expert that is promoting Serbia abroad is important.

According to survey that Strategic marketing conducted in July 2007, 50% of people that participated in survey that are satisfied with their life in Diaspora wants to come back to Serbia and 39% of them consider return in Serbia as a realistic option.

Serbia is good place to return because competitiveness is small, growth of GDP is the biggest compared to the neighboring countries, market is quickly developing and that’s a reason way Ministry for Diaspora will conduct different projects with a goal of returning young experts to Serbia as a way of Improving economic development of country.

Priority of Ministry for Diaspora will be to discourage trend of Brain-drainage and to provide opportunities for our citizens in Diaspora to become real partners in economic development of Serbia by usage of their skills, expertise and resources, said Minister Sreckovic.