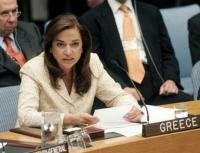 "Greeks and Serbs have a special relationship'

The 55th-anniversary edition of the Serb newspaper “Novosti” features  a full-page interview of Foreign Minister Ms. Dora Bakoyannis with its correspondent to Greece, Mr. Zvonimir Simunek.

Journalist: No progress was made following the latest proposals by UN Special Envoy on the FYROM name issue, Mr. Nimetz, towards finding a solution on the long-running dispute between Greece and it neighbour to the north. A series of meetings followed with U.S. administration representatives and your colleagues from FYROM. But there’s no solution in sight on the crisis regarding your neighbouring country’s name.

Ms. D. Bakoyannis: As you know, Greece has been participating over the past few years in negotiations with FYROM under the auspices of the UN. During a certain period of time, Greece has repeatedly proven its good will and its sincere wish to reach a mutually acceptable solution; an agreement without winners or losers. We are guided in our efforts by UN Security Council Resolutions 817 and 845 regarding this issue. Unfortunately, Skopje has chosen not to respond in a similar manner. At the moment, we are evaluating with the necessary care and constructive approach the set of ideas put forward by Mr. Nimetz. The first signs from Skopje are not encouraging. I would like to stress that Greece will continue to work for a definitive solution on this important issue. I hope that the political leadership in Skopje will drop this counterproductive intransigence and work towards a common future with us within European and Euro-atlantic institutions.


Journalist: At the moment, Greece – like many other countries – is faced with economic problems. Could this change or halt the course of the Greek government’s reforms?

Ms. D. Bakoyannis: Greece, like the rest of Europe and the world, is faced with a new reality of economic difficulties. The banking crisis, the credit crunch and the money-market upheaval are all part of a gloomy picture in these difficult times. A difficult winter lies before our continent. So we have to make a choice. A choice between reverting nationalistic, introverted entities with limited ability to tackle challenges, on the one hand, and adopting a new approach, where we all stick together and bring practical solutions to the table for the whole of Europe. Greece plays its own active part and fully supports EU initiatives to tackle the current crisis and it is expecting tangible results from this action plan in the near future. Let’s not delude ourselves, the road is long and difficult.

Journalist: Relations between Athens and Belgrade are at a high level. But some give the impression that the dominant forces within the EU at the moment have reservations as to Serbia’s full association with the EU.

Ms. D. Bakoyannis: Day by day, Serbia is coming ever closer to the EU. Important steps have been taken. As is well-known, Greece is a friend of Serbia and a staunch supporter of its course towards the Union. The latest encouraging developments include Serbia’s cooperation with the International Court of Justice, the progress made on structural changes, and Serbia’s European approach to certain issues. It is true that sometimes progress is slow, but this is not due to any anti-Serbian feelings within the Union. On the contrary, we think that Serbia has a lot to offer to the EU and that, similarly, the EU has a lot to offer Serbia.


Journalist: You have had a series of meetings with Serbian politicians. Did any of them make a particular impression on you?

Ms. D. Bakoyannis: Greeks and Serbs have a special relationship, which goes back in time. We understand each other and our relations have traditionally been good. It is therefore no surprise that it is easy for me to work with the Serbian politicians that I have had the opportunity to meet. I particularly respect President Tadic, and I have a close, sincere, and constructive relationship with Foreign Minister Jeremic.

Journalist: What will the future look like in our region, in your view?

Ms. D. Bakoyannis: The Balkans were once known as the powder-keg of Europe and we have experienced a century of tough national, religious and ideological conflicts, which lasted until recently. But today, we are rapidly moving ahead to shake off this reputation, to the benefit of our peoples and the new Europe that we are building. Still, there are some crucial issues, but we are trying to address them in a new spirit of cooperation and tolerance. Indeed, I believe that there have been steps in the right direction, but we need more. To me, the key to the region’s stability is its European perspective. Bulgaria and Romania’s accession to the EU in 2007, and Turkey’s and Croatia’s candidacies bring a message of hope for the region’s economic and social stability. We would like to see more. We hope that the day will come when the whole of Southeast Europe will be part of the European family. But the road towards Europe is demanding and difficult, particularly at such unstable times. Given the region's reality, substantial progress has been made but there is still a lot of work to be done. But I believe that we have every reason to be optimistic about the region’s future.


Journalist: You belong to a family that has been active in shaping modern Greek history for the past 100 years. Your ancestors took part in the creation of modern Greece. Your father, Mr. Konstantinos Mitsotakis, was Prime Minister.


Ms. D. Bakoyannis: I would be lying if I refused to admit that this is both an advantage and a disadvantage. When you come from a family with a long history in politics, you indeed start from an advantageous position thanks to the experience acquired by living in an environment that offers itself for public service – without having entered the political scene – and, of course, thanks to having a famous name. The problem is that throughout your career, you are judged more severely than others. The public expects more of you and sees you more suspiciously, even with a certain lack of understanding. But I am deeply convinced that each one of us follows his own way in life, and in a democracy people judge you based on your merits rather than your origin. In the final analysis, we learn more about politicians from their paths than from their origins.

Of course Srbia and Greece have had good relations -
they date back to 1913 when they aquired Macedonia -
anyone that cares to admit knows that.

Greece and Serbia have close relations as neighbours and as Orthodox brothers...We shared a border until Tito decided to rename Vardaska "macedonia" and create a language and nationality too...