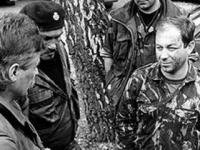 Wartime assistant Interior Minister Tomislav Mercep has been accused of either directly ordering or failing to prevent the illegal detention and torture of 52 civilians from Zagreb, Kutina and Pakrac area.

Wartime assistant Interior Minister Tomislav Mercep has been accused of either directly ordering or failing to prevent the illegal detention and torture of 52 civilians from Zagreb, Kutina and Pakrac area.

Forty-three of those civilians were killed, three have disappeared, while only six survived with serious physical and psychological traumas, daily Jutarnji List writes.

The indictment raised against Mercep names 28 of the 52 victimes – 24 of them are listed as unidentified victims, whose bodies were found in mass graves in Pakracka poljana.

The Interior Ministry unit under Mercep’s command was stationed at the Zagreb Fair and at the Pakracka poljana. The indictment states that the members used the community house and the changing rooms of the local football club as a prison where Serb civilians – who were first robbed of their belongings and savings – were tortured, cut with knives, electrocuted, forced to dig each others' graves and then shot in the head.

Mercep personally interrogated some of the victims, freeing one Djordje Gunjevic after finding out he was the government's health commissioner for Pakrac district.

Gunjevic's savings and car were taken away from him and he endured six days of torture that included electroshocks and during which three of his ribs were broken. After his release, he was given back his vehicle but not his money.

Amongst the 43 civilians killed are also members of families Zec, Mihajlo, Marija and a 12-year-old girl Aleksandra. In a farce-trial against the members of his unit Munib Suljic, Sinisa Rimac, Igor Mikola, Nebojsa Hodak and Snjezana Zivanovic held in 1992, Mercep was not called as a witness. All were cleared of the charges.

In Zec' case Mercep is accused of command responsibility because the State Attorney’s Office suspects that the "unidentified members of his unit" took weapons and a Ministry of Interior's vehicle that was connected with the murder.

The indictment against Mercep leaves open the question of renewal of the process against the families' immediate killers.

In the 1992 trial, the case was classified as aggravated murder, while the indictment against Mercep calls it a war crime.

War crimes do not have statutes of limitations, the daily writes.