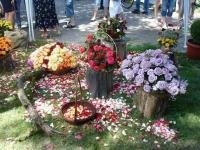 Following the opening of the 17th “Rose Festival” Dusan Petrovic said that trade volume in this branch currently stands at €4 million, but Serbia can do much better, the Minister noted, adding that in the first four months of 2011 flower export was four times greater than during the entire 2010.

"Roses of Lipolist" festival  is one of the youngest manifestations in Sabac municipality eventhough it lasts more than one decade. It takes place in Lipolist, a village situated in the plain under Cer Mountain, 25 km far from Sabac towards Loznica direction.

Lipolist is a wealthy village in Macva where, in addition to traditional agriculture, more and more households deal with horticulture, especially growing roses, and therefore it is called the most aromatic village in Serbia. Consequently, people came to an idea to organize this tourist manifestation that is very famous nowadays. However, rose growers from Lipolist export their seedlings to more European countries today, even to Holland, the metropolis of horticulture.

The festival takes place in June when roses bloom most beautifully and smell most powerfully. Visitors can attend the numerous and very interesting manifestation programmes.

Visitors are surely most interested in the flower exhibition. The beauty of rose arrangements takes your breath away, and exhibitors of other types of flowers and decorative plants also contribute to the exhibition diversity. The exhibition has competitive character. Apart from the exhibition, the festival visitors can attend professional lectures on the theme of roses, cultural-artistic programmes, they can look around rose nurseries etc. Hackney-carriages pulled by lively horses take them to nursery tours, which represents a special attraction.

Minister of Agriculture, Trade, Forestry, and Water Management Dusan Petrovic opened a traditional “Rose Festival” in Lipolist near Sabac and stated that Serbia has a great opportunity to export flowers with the state’s support.

Following the opening of the 17th “Rose Festival”, Petrovic said that he held a meeting with large rose growers with whom he discussed fundamental support to producers of decorative plants, which he said is a great export opportunity for Serbia.

This year will be far better than the previous ones when it comes to flower growers and exporters, he observed.

Trade volume in this branch currently stands at €4 million, but Serbia can do much better, the Minister noted, adding that in the first four months of 2011 flower export was four times greater than during the entire 2010.

Serbia exported a large quantity of flowers to Russia and the EU, and in agreement with flower growers, the export of flowers can become one of Serbia’s brands, he remarked.

The Minister underlined that the government will strongly endorse rose growing, primarily in Lipolist, but also in other parts of Serbia, specifying that this will be done both through favourable loans and facilitations for production and export.

At the festival in Lipolist flower growers organised an exhibition of roses and other plants, attended by guests from Serbia and abroad.