DS: Only with Tadic can Serbia move forward

Only under the leadership of Boris Tadic and the "Choice for a Better Life" coalition can Serbia be a powerful, promising and prosperous European country that will be respected worldwide, said Wednesday the participants of the coalition's convention held at Square of the Republic in Belgrade.

Only under the leadership of Boris Tadic and the "Choice for a Better Life" coalition can Serbia be a powerful, promising and prosperous European country that will be respected worldwide, said Wednesday the participants of the coalition's convention held at Square of the Republic in Belgrade.

Vuk Jeremic, a member of the Democratic Party (DS) presidency and Serbian Foreign Minister, said that there is only one man in Serbia who understands the world, the crisis and the fact that the world scrambles for every dollar, and that only one man in Serbia can provide investments and prosperity. That man is Boris Tadic, he said.

He said that it is thanks to Boris Tadic's efforts, vision, vigour and wisdom that Kosovo is not a state today, and pointed out that Serbia is marching towards a safe future in the EU.

"After many years, our citizens now travel across Europe without visas and the country has become an EU candidate. Only one candidate has the full support of Russia in the UN Security Council and a strategic partnership with China, at the same time being able to bring together the countries of the Non-Aligned Movement in Belgrade. Only one candidate can do all that, and that is Serbia," said Jeremic adding:

"We have restored Serbia's honor and dignity and we will fight to win." Dragan Djilas, DS Vice President and candidate for Belgrade's Mayor, called on Belgraders not to make their support for him "our little secret", but to demonstrate it boldly in the May 6 elections, by voting for the policy which transformed Belgrade into the capital of this part of Europe, and Serbia into the country of Fiat, Boss, Panasonic, Swarovski. "It is a shame that the ruined politicians are offering changes in Serbia," Djilas said. 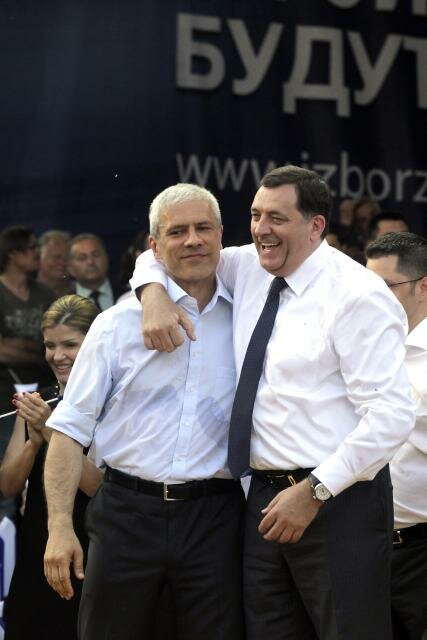 President of Republika Srpska Milorad Dodik said that Boris Tadic set Serbia on the road to growth, the road which Republika Srpska wants for Serbia, and that is Serbia as the most important and strongest country in the region. He stressed that Tadic needs another mandate to finish the job.

"He understands the historical context in the best possible way, so vote for the best candidate, and the best among them is Boris Tadic," Dodik said.

The support for the "Choice for a Better Life" coalition and its presidential nominee Boris Tadic was given by leaders of the Serbs from the region, including Nikola Spiric from Bosnia-Herzegovina, Srdjan Milic, Predrag Popovic from Montenegro, Milorad Pupovac from Croatia, representatives of the Serbs from Slovenia, Slovakia, Albania, Hungary, and many public figures.

Boris Tadic, the presidential candidate of the 'Choice for a Better Life' coalition, said Thursday that the May 6 elections are vital to the future of the country.

Only if we continue pursuing the foreign policy we have pursued so far can our country stay on the road to progress, Tadic told Radio Television of Serbia (RTS). “We have set up a system that shows results when it comes to investment and technological renewal of our country. We have achieved a lot in the reform process and public sector in general regarding macroeconomic policy and it is necessary to keep steady on the path,” said Tadic, who is the leader of the Democratic Party (DS).

He stressed that Serbia was steadily going forward, despite the slow growth rate caused by the global recession. Serbia has to continue making changes and progress or it will be left in uncertainty that could prove devastating, he added. “There is no prospect for economic growth if Serbia strays away from its current foreign policy. We have been creating the foreign policy over the last four years in very difficult circumstances,” Tadic said.

Tadic also touched on corruption, saying that Serbia has brought organized crime to its knees but it is necessary to make a few more judicial moves to crush it completely and meet the relevant European criteria.