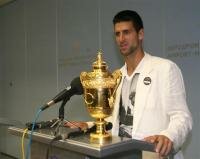 Djokovic happy to celebrate title with his people

Djokovic: "This trophy is dedicated to Serbia"

World No.1 tennis player Novak Djokovic was welcomed in front of the National Assembly of Serbia in Belgrade by dozen thousands of people.

“I will never forget the celebration that you have made for me tonight making this the most beautiful day of my life and I will be forever grateful to all of you. This trophy is dedicated to you and to Serbia,”Djokovic said.

The world number one arrived in the building of the National Assembly around 21 p.m. in an open bus accompanied by his family and friends.

Djokovic stated upon arrival in Belgrade that he is happy to celebrate the Wimbledon title and his number one ranking with his nation.

“These are the most beautiful days of my career. The feeling is just great, although I still did not have the time to think about the success I made,” Djokovic said at Belgrade Airport Nikola Tesla.

The new king of tennis underlined that he played his best tennis against Rafael Nadal in the Wimbledon finals on Sunday.

“I was facing the greatest possible opponent, and I am glad that I was capable of playing my best tennis when I needed it the most,” Djokovic underlined, adding that he will have a short break before going to Sweden where he is to play for the national team of Serbia in the Davis Cup quarterfinals from July 8-10.

Djokovic achieved this historic success by advancing to the finals of the Wimbledon Grand Slam tournament, defeating France's Jo-Wilfried Tsonga by 3-1 in sets in the semifinals on Friday. Djokovic won his first Wimbledon title on Sunday, beating Spain's Rafael Nadal, also by 3-1.

Since the establishment of the ATP list in 1973, Djokovic is the 25th world's number one tennis player.

The new top 10 ATP ranking is as follows: