Roughly 1,000 mostly youthful rioters on Wednesday again clashed with riot police outside Parliament, on the second day of a nationwide 48-hour strike called by Greece's two main trade unions against the government's austerity measures -- which were nevertheless passed by majority vote in Parliament hours later.

Greece's lawmakers have approved a key austerity bill, paving the way for the country to get its next vital bailout loans that will prevent it from defaulting next month.

The final result was: 155 MPs voted yes to the measures (including one opposition New Democracy MP), 138 voted no (including one ruling Pasok MP), two abstained and five answered "present".

The vote took place amid clashes between police and protesters outside parliament.

The measures will be implemented over the next four years, and have been modified in the weeks running up to the vote.

Sales tax: The VAT rate for restaurants and bars is being hiked from 13% to the new top rate of 23%. This rate already covers many products in the shops, including clothing, alcohol, electronics goods and some professional services.

Wealth taxes: Tougher luxury levies will be introduced on yachts, cars and swimming pools, along with higher property taxes.

In addition, the Greek government has pledged to combat tax evasion, which it believes will bring in an extra €1.15bn by 2015. Some legal tax exemptions are also being closed.

Spending cuts
Public sector wages: Salaries will be reduced by 15%.

The public sector wage bill: The goal is to cut 150,000 public sector jobs, through a hiring freeze and abolition of all temporary contracts. This should cut the total bill by €2bn by 2015.

Spending cuts: Many government department budgets are being reduced. This includes a €200m reduction in Greek defence spending next year, increased to €333m a year from 2013. Pharmaceutical prices are also being reduced, to cut health spending by €310m this year.

Social contributions: The rate on Greece's equivalent of national insurance will be increased, and there will also be a new crackdown on contribution evasion and undeclared workers.

Public investment: Spending on new infrastructure projects will be reduced by €850m.

Privatisations
Stakes in various state assets will be placed on the auction block, in an effort to raise €50bn over the next four years.

2011: The process has already begun, with the sale of a 10% stake in Hellenic Telecom to Deutsche Bank for €400m. Two port operators, Piraeus Port and Thessaloniki Port, will also be partially privatised. Stakes in betting monopoly OPAP, the lender Hellenic Postbank and Thessaloniki Water are also scheduled for sale.

2012: The pace picks up, with €10bn of assets earmarked. This includes stakes in Athens Water, refiner Hellenic Petroleum, electricity utility PPC, lender ATEbank. A wide range of other state assets will also be sold – assuming buyers can be found – from mining rights to airports.

Violent incidents between the riot police and demonstrators in the centre of Athens, early Wednesday, marked the second day of the 48-hour strike, as the parliament is voting on the medium-term fiscal strategy programme.

The police made extensive use of tear gas since early morning, while a protester was seriously injured on the head outside the Hilton, and was taken to the hospital. According to sources, the injured is an Ota (local goverment) union representative.

The atmosphere is still tense in the centre of Athens and especially outside the parliament, with the police attempting to remove not only the protesters but also any reporters present. The indignants have started gathering at Syntagma square, with many arriving there from other Greek cities.

Following yesterday's incidents, the police is in high alert, with several squadrons placed outside the parliament to prevent people from attacking the MPs to block their entrance.

There are several rallies scheduled for Wednesday in the centre of Athens, the major being the GSEE and Adedy unbrella unions' joint rally, to begin at 7pm at Klathmonos square. 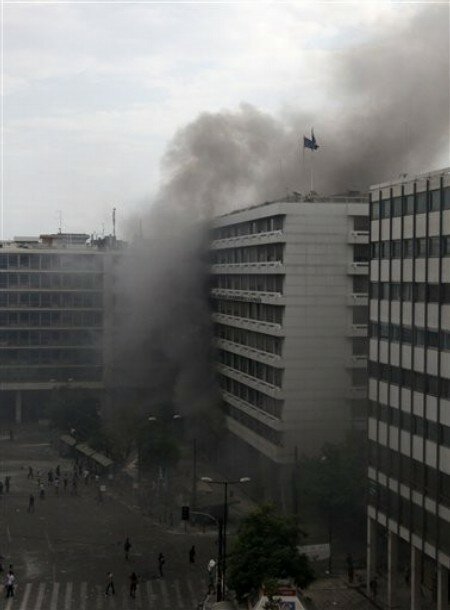 Protesters attacked offices of the finance ministry off Syntagma Square outside parliament on Wednesday during the vote on an austerity package needed to secure financing from international lenders.

About 30 people with sticks and iron bars attacked the ministry offices in Syntagma, police sources said, breaking the windows at the entrance and on higher floors.

Roughly 1,000 mostly youthful rioters on Wednesday again clashed with riot police outside Parliament, on the second day of a nationwide 48-hour strike called by Greece's two main trade unions against the government's austerity measures -- which were nevertheless passed by majority vote in Parliament hours later.

The violent protesters, usually identified as self-styled anarchists and anti-state activists, threw stones and homemade firebombs against police, who responded with the use of teargas.

Since early this morning, downtown Athens is off limits for vehicles.

Sixteen people were injured in the clashes and taken to a nearby hospital. Only one person remained hospitalised.

Earlier, individuals participating in the "indignados movement" engaged in a brief verbal altercation with members of the communist party-affiliated PAME trade union, which had organised a separate protest rally

The police has so far made nine arrests and detained 29 people in connection with the incidents, while the 18 arrested during Tuesday's incidents were led before a public prosecutor, with twelve of them indicted to stand trial on misdemeanor charges and the rest facing felony charges for attacking policemen and disturbing the public peace.

Sixteen injured protesters were taken to the Evangelismos hospital, including union representative Yiorgos Harissis, vice president of the Poe-Ota (local government workers) union, with fifteen of the injured being discharged later on Wednesday. There were also 26 injured policemen taken to the 401 Military Hospital for treatment.

Despite the incidents, thousands of Indignants remain gathered at Syntagma square, with many having arrived there from other Greek cities specifically for today's rallies.