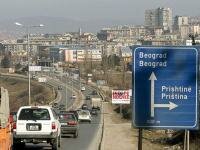 The dialogue, taking place under the auspices of the EU, has yielded concrete solutions on the issues of freedom of movement and vital records, and an agreement in principle was also reached regarding the recognition of college degrees and school diplomas.

Representatives of Belgrade and Pristina reached Saturday during the fifth round of talks in Brussels the first concrete agreements, whose implementation will be monitored by a joint working group.

The dialogue, taking place under the auspices of the EU, has yielded concrete solutions on the issues of freedom of movement and vital records, and an agreement in principle was also reached regarding the recognition of college degrees and school diplomas.

According to the release issued by the EU, the agreements will come into effect as soon as it is operationally feasible, and their implementation will be guaranteed by a trilateral working group composed of representatives of Belgrade, Pristina and the EU.

"We believe reaching these agreements constitutes a big positive step. These solutions will go a long way toward unburdening the Serb population in Kosovo, without in any way jeopardizing the sovereignty of the Republic of Serbia or recognizing Kosovo's so-called independence," head of Belgrade's team Borislav Stefanovic said after the talks.

"I think this is a very good solution, because we managed to avoid turning over original records, which was a firm and consistent request coming from Pristina. Original records are proof of sovereignty," Stefanovic said.

Freedom of movement has been resolved in the following way - in the future, Serbian citizens living in Kosovo will be able to use license plates bearing either KS (Kosovo) or RKS (Republic of Kosovo), which have the attributes of "Kosovo's so-called statehood." In the entire territory of Serbia, however, only vehicles with KS plates will be allowed.

The freedom of movement issue has also been regulated through the use of identity cards issued in Kosovo and not "Kosovo passports," on which the Pristina side had insisted since the start of the dialogue. The Serbian Interior Ministry will issue two documents to citizens crossing the administrative line - the first confirming that the identity card serves only for identification purposes and is not legally recognized, and the second denoting the date of the administrative check.

As far as driver's licenses, the Serbian Interior Ministry will issue a receipt saying the document in no way relates to Kosovo's status and the license holder can use the document only to operate a motor vehicle, based on a letter which will be sent by the head of EULEX, and which will guarantee the licenses are in line with European standards and UN Security Council Resolution 1244.

A short-term solution has been agreed for the issue of insurance, but the goal is to establish a mechanism which would allow for an agreement between the two insurance company associations, to avoid problems which will be created by the fact insurance will be charged on the administrative line.

The agreement in principle on the recognition of college degrees and school diplomas requires the nostrification of the document by a third party - an academic institution or international organization.

Telecommunications, the cadastre, customs seals and energy were also discussed in Saturday's meeting, with the two sides also exchanging views on religious and cultural heritage, and regional cooperation.